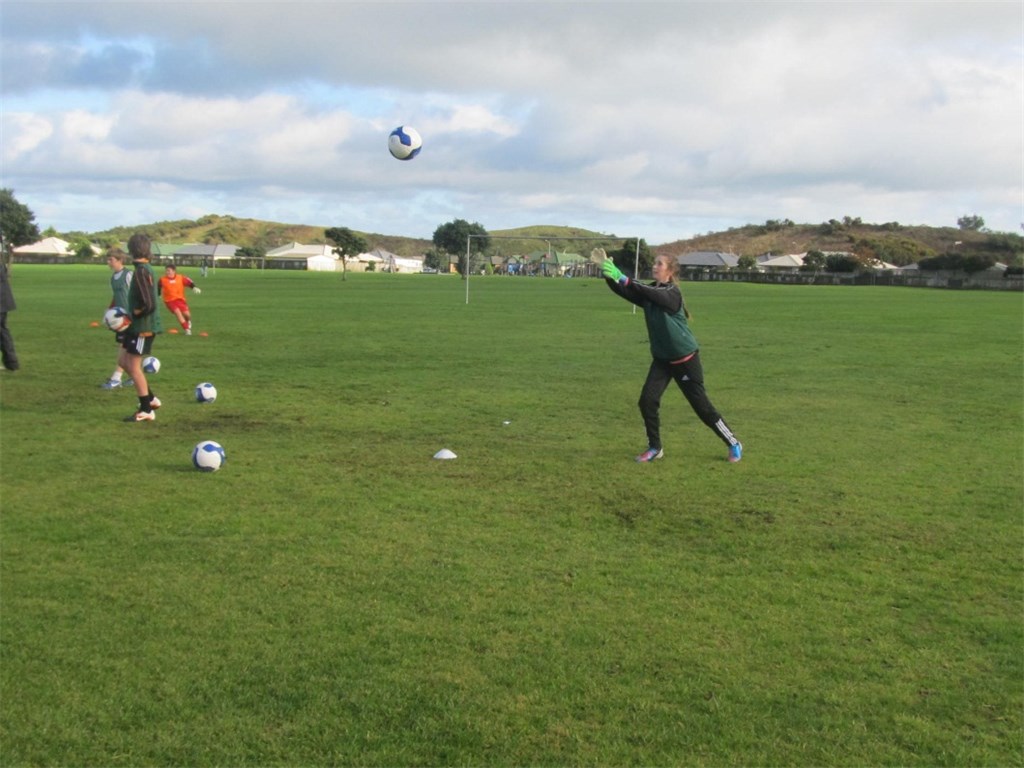 Awesome feedback from UHCF girls Georgia and Jemma, who recently attended the Premier Goalkeeping Academy with Michael Utting.  And massive congratulations to Jemma – Goalkeeper of the Day!

“On 23 June 13, Georgia and I travelled to Paraparaumu for the Premier Goal Keeping Academy with Michael Utting, former New Zealand GK.

It was very exciting to be coached by Michael and receive tips on how to get up from a deflected save ready to save another shot.  One of my favourite activities was Goalie Wars.  Two GKs stand in goals about 10-20m apart and then try to score against the other by throwing the ball into their goal.  If a goal was scored against you them you were out and another GK stepped in to try and make the next save.  I managed to stay in the longest.

At the end we had prize giving.  Michael gave a speech on how well we all did but said that out of 50 GKs, one person had stood out the most…he then awarded me with GK of the day!   I was so happy and was given a football and three McDonalds vouchers.

I enjoyed getting to know new people and techniques that I could learn from.  Michael said that to be a good goalkeeper, you don’t need the best gloves, you just need the skills – that was really cool of him to say.”

“Thank you Upper Hutt City Football for the amazing opportunity you gave Jemma and me on Sunday 23 June.  We are lucky to have gone to a training session with ex-All White’s goal Keeper, Michael Utting and his Premier Goal Keeping Academy!

We had a really fun time and got heaps of really helpful goal keeping tips! 😀  We were split into 4 groups and each group rotated through 4 different training sessions. Each coach giving us different tips

Before we knew it the 2 hour training was over and we were all were given a certificate.

Out of 50 Goal Keepers then attended the training across the whole of the Wellington Region Jemma was nominated as Goal Keeper of the day! Whoo!, Go Jemma 😉 “


Meanwhile, here’s what the coaches had to say…

Brett here, WOW what a awesome turnout on Sunday, Michael and I were so amazed at the level of ability on display and also how keen everyone was to learn and listen. We hope all the kids had fun and enjoyed keeper only training. Player of the day went to Jemma Browne from Upper Hutt  City Women’s Football, Michael and I would like to congratulate Jemma for her efforts.

Once again we really appreciate your support and we look forward to developing your childs keeping skills.

Thanks from the team at Premier Keepers Academy