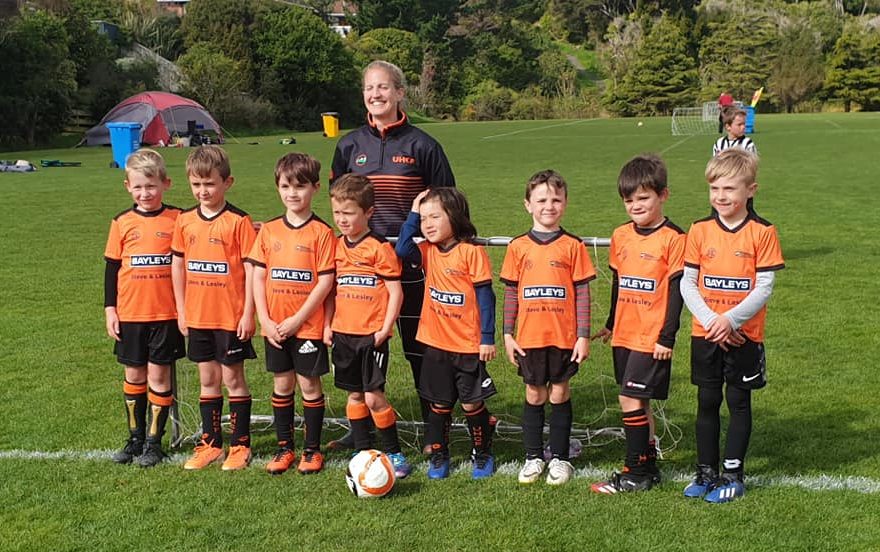 Saturdays 8-9am,  10 April to 29 August 2021
No games Easter Weekend or each middle week of the school holidays. This season we expect to have around 50-70 in each grade each Saturday morning with over 200 expected on the Maidstone Park Turf on Saturdays in First Kicks, 7th and 8th grades.

Artificial football turf at Maidstone Park, Park Road (opposite Parapine ITM). Festival days every three or four weeks – where we travel to another Hutt Valley turf to play other clubs organised by Capital Football.

The first part of the session is made up of warm-up skill sessions that focus on each training area including general movement, football coordination and football technique.

Then we play small-sided games between teams within the grade. We follow the New Zealand Football Junior Framework that encourages a variety of skill development and is all about building the foundation for future years. You’ll see us using laminated games’ guides from the framework each Saturday.

Teams of around seven are usually grouped with players from the same schools and/or area. Small-sided games are either between four or five players on each side.

Registrations open in February and March each year.
Find out how to register and pay online.
2021 season’s fees are $110.

We supply the playing strips (tops or shirts) each morning and collect them back in at the end of the morning.

To ensure each player has as many touches of the ball as possible and young players concentrate on skills that are best suited to their age we play a simplified version.

There are a few tournaments around the region throughout the season where we create combined teams of players that are usually put forward by each team coach and the grade manager. Ask your coach for more info.

We have a number of parents volunteer each season to act as coaches to look after a team throughout the season– and we’re always to keen to find some more. The role is far more about children than football. There’s a ready-made toolkit to work with and we always love coaches who are keen to let the kids’ imagination go crazy. Everyone coaching is a parent of a 7th grader. Please let us know if you’re keen, email Junior Captain, Glynn Paling, juniors@upperhuttcityfootball.org.nz

We play in all weather. The turf allows us to. The rule of thumb is we’ll always play-on and if it’s particularly bad then we’ll call it off. Otherwise, expect to get an email before 7:15am. Cancellations will also be posted on our grade Facebook groups as below.

Join our grade Facebook group pages and stay up with the latest on our club Facebook page.

If there’s anything else you’d like to know please get in touch with us.