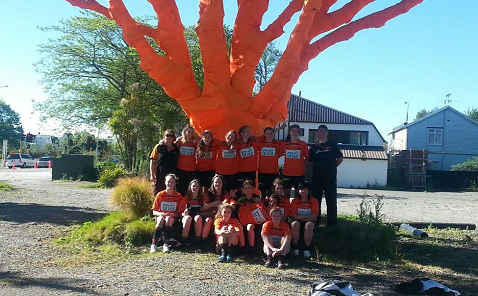 First day for the girls at the Coastal Spirit tournament in Christchurch over Labour Weekend and they’re up against foul weather, strong wind and try as they might could not break the deadlock despite sterling performances and domination of possession.

Day two, the team discovered their attacking prowess, on a roll and realising their potential in the competition.  Full of pride for their UHCF colours, with hearts and minds on the task throughout, a youthful side has battled and competed well against tough opposition.

A team effort to be proud of and bodes well for future ventures on the competitive stage.

Full report, thanks to Mike Gibbs (Coach) below:

This year’s tournament saw an increase in the number of female teams to 12 teams. Of those 12, four Wellington teams were entered; Upper Hutt, Stop Out, Wellington United and North Wellington and then two x pools of six teams were set up. The format also changed with the extra teams added so no quarter finals or semi finals this year.

Having lost the toss and playing in to a strong wind the girls knew they had to be at their best in order to dispatch of their opponents.   They did just that and dominated around 80% possession into the wind making more chances than Stop Out especially in the last five minutes of first half when camped in their goal box. Unfortunately all the shots we had counted for nothing and our missed chances would prove all too costly.

Nil all first half.

Second half came and much of the same, the Upper Hutt ladies dominating possession. Came close another couple of times but it was in the last minute of the game when a back pass went astray and a Stop Out player pounced on the ball had a shot which Jemma our keeper managed to deflect which led to a two footed race to stop the ball from going in and the girls just couldn’t stop it.

Final score 1 nil to Stop Out. Girls were absolutely upset as they knew they had played their hearts out and deserved points at least. Stand out player for this game was Megan Oliver.

Having suffered their first defeat of the tournament the girls where determined to bounce back and get their first points. Again losing the toss we start into the wind and we settle first on the ball and dominate possession. Like the first game we would rue missed chances and not having a dedicated striker that can put balls away so the ladies had to work hard as a team to be rewarded. Again into the wind we finish the first half at nil all with the wind taking a lot out of the girls.

Second half Murphy’s Law the wind drops a tad and ends up being an even contest.  Five minutes towards the end we had two players go down and the other team kept playing which forced our keeper to come out towards the ball where in the end was chipped and we were 1-nil down. The girls didn’t drop their heads though and fought back earning a last minute corner.  Pushing everyone forward Sophie sent in an amazing delivery that curved right into the goal but for the ref to award play on as was not in a position to see and the girls were left wondering what just happened!  Surely have first points but no

Final game of the day and you guessed it into the wind the first half! Game was fairly even as both teams had their chances. The girls had the best chance of the half when Mikaela got hold of the ball and as it was mis-kicked ended up hitting the right hand upright post past a diving keeper. Again wind playing a big part in the game and for the third time, nil all at the break.

Second half the girls were running out of steam so tightened up their hold in the middle of the park. Like in the first game another defensive error late in the game saw Western counter attack and check the keeper into the back of the net.

Final score 1 nil to Western and the girls still chasing their first points of the tournament.
Stand out performance to Jenna Reddy and Jemma Browne.

Highlights of the Day 1:
Seeing a group of players come together and work so hard for each other on the field and seeing the pride they had playing for Upper Hutt knowing that results could have easily have gone the other way. Also seeing how a club of girls can accept our three guest players and our overseas exchange student Aoi Uchinda into the side making them feel so welcome that they want to be considered for the next U17 or U19 tournament in 2014.

Day 2 and each team had to play two games in order to find out where they finished in that pool:

This was the game for the taking. A game we must win in order to put credibility back into the team and return the self belief that was left behind from yesterday’s heartbreaking losses. Both teams starting evenly and the Upper Hutt girls started to camp down in the Christchurch half. Our main issue yesterday was not putting away our chances and today that had to change. However easier said than done as chance after chance after chance we still could not find the back of the net and this was frustrating the girls.

Nil all at half time.

A quick reality check for the girls at the break and some key goals to achieve in the second half and away they went. Second half the girls came out firing. After slowing the ball down and playing it to feet they played some really impressive football. A quick switch of the ball to Carolyn O’Reilly and she had a shot which rebounded off the cross bar on to the head of Megan Oliver who finished the ball into the     back of the net.  Finally our first goal of the tournament!  You could see a huge weight come off the girls shoulders and they settled down to play decent football for the remainder of the match. To <st1:place w_st=”on”>Christchurch credit they made our girls work very hard to defend the lead and that’s how it ended with 3 points.

Players worth mentioning were Carolyn O’Reilly, Miranda Williams-Gray and again Megan for her follow up on goals.

After finally securing our first points of the tournament the girls were in the right mood to press on and gain their second win of the day. Going into a strong wind and with a change in formation the girls worked tirelessly and managed multiple attacks on goal but making sure nothing was let in during the closing stages of the half.

Nil all at half time and a talk about what a win would mean to the team in terms of not only were they finish but what time they started play on the third day was enough to motivate the players to dig in that little bit extra and leave it all on the park.

Halswell came out strong and the girls absorbed all the pressure. A late break down the right hand wing and a ball through to Carolyn had her taken down just outside the box for a free kick. The wall was set and one of the birthday girls Sophie stood up to take the free kick. A nice low free kick around the wall and into the back of the net and the girls were celebrating another goal and looking at an important win.  Halswell kept piling on the pressure and pushing more people forward but the girls didn’t make the same mistake as yesterday and held on for that important 1 nil win.

Players that stood out, Megan, Sophie and Carolyn.

So there we had it it, the finish of pool play in Group B.  We ended up on 6 points with 2 goals for and 3 goals against and finishing 4th out of 6 in pool play which could have easily been 1st equal and 3rd overall on goal difference had the first 3 games been a draw.

Highlights of the day:

Seeing the team get better and better as the tournament went on and getting the two valuable wins to give the club some respectability. Also the encouraging comments from all the other coaches of teams played that we were a great fair team to play and should be proud of the performances we have put in.  This was also echoed from the opposition teams on the first day of tournament. Celebrating two birthdays in the team of Olivia Ryan (16) and Sophie Abbott (19).

Day 3 and final play off positions:

Playing against a team full of mainland national women players fresh from not playing on the first day was going to be a hard task for the ladies. They were up for it though as they withstood a number of attacks from Coastal but then turned those into lovely counter attacks. All of a sudden the ball came loose in the middle of the park and was pounced on by Ashleigh who supplied a lovely ball out left to Jenna on the wing who took one touch and then crossed the ball into the path of Carolyn O’Reilly who finished off the ball into the back of the net.

The side then seemed to cool down too much and even though full of confidence let in a goal inside the first two minutes of the second half to be level 1-1. An intense 10 minutes and the game was all level with 10 minutes to go and that’s when injury hit! Mikaela Hunt getting to the ball first and went to turn and her boot got stuck in the ground and ended up tearing her ankle ligaments. With play stopped the players tried to regroup but the same intensity they had been playing with was not there.  They were preparing for penalties when a sloppy clearance cost them a goal which they could not get back and their heads dropped for the first time.

With a minute to go another late goal and the final score 3-1 to Coastal Spirit.
Players that stood out Ashleigh, Aoi, Mikaela and Megan

Very proud to have had the opportunity to be a part of this team. To see them grow from game to game to see them come together as one and perform with integrity, I could not have asked for more.

The highlights of the tournament would have to be the way the group of girls came together as a team. Having not played together as a unit, other than some warm up games & practices. They also showed they were really competitive and could have won even more games, with just a little more luck going their way. The team spirit continued off the field, with the quiet ones and guest players being included and looked after by the rest of the team. Big thanks to Mike for all his hard work organising and coaching the side. Our small but committed team of 3 including Mike, Erin & myself, certainly had a busy weekend, driving, coaching, physio, photographer, and even linesmen. It felt like it was non stop!

Even though we went all that way to play a local team for our first game, the competition from the teams, showed this is a worthwhile tournament attending in the future. The girls are already talking about next year.

Thank you for the Christchurch trip. I really enjoyed the time and I’m really happy I could be part of this team and this is my pride.  This is my best memory in NZ!! Thank you very very very much.

Thank you for an awesome tournament it was truly a fantastic tournament and was great to be apart of your great team thanks heaps for everything.