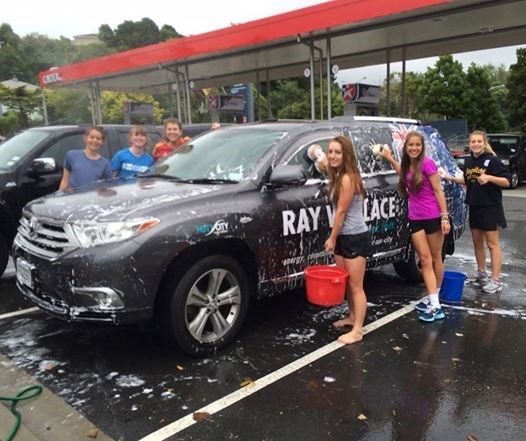 The 2 cars washing sessions at the Stokes Valley Caltex Station, manned  by the members of an Upper Hutt U17 girl’s team ( with valuable advice & assistance from parents! ) proved to be a very enjoyable and successful venture. The team, which include 2 Stokes Valley girls, were  fundraising for the U17 Youth Football Tournament which took  place in Auckland on March 21st. Trade was very brisk, added and abetted by enthusiastic girls and parents holding up signs at the entrance. Even the Mayoral car received a top notch wash! The total amount raised was just over a thousand dollars, which was absolutely awesome! The workers were blown away by very generous donations from people, most of whom paid over and above the required amount asked, and to those who just decided to donate some money. We liked to take to this opportunity to say a very big thank you to you all.

We could not have done this without Reece and Christine Lewis, owners of the Caltex Stokes Valley Petrol Station, They generously allowed  their venue and water to be used not just once but twice for our fundraiser. Thank you very much! Last by no means least, we have to give Marie Wallis, Manager of the team, a huge pat on the back for her behind the scenes hard work and effort and to Phil Dobbin and Mike Gibbs for their excellent coaching! We also have to acknowledge A C Mallock, Builders, who will be sponsoring a new U17 Strip.

This article also appeared in the Stokes Valley Times