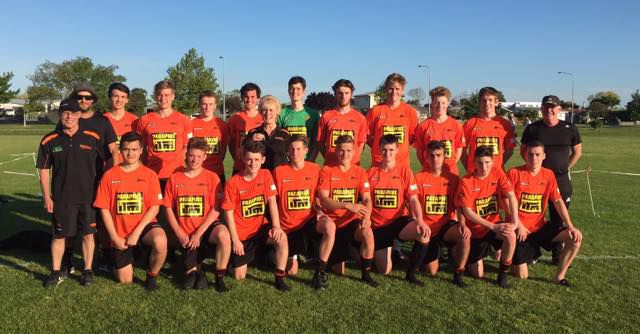 The team got off to a flying start with a 2-0 win over East Coast Bays, followed by a 0-0 draw with Cashmere and finishing the day on a high with a 3-0 win over local rivals (and last year’s finalists) Wellington Olympic. Top of the table at the end of day 1! Gotta be happy with that!!

Hopes were high that the team could make it through to the knockout rounds for the first time in the club’s history, with just one win from the two remaining games on the 2nd day of the tournament required.

Unfortunately, we seemed to run out of steam and lacked the intensity of the previous day, losing 1-0 to Western Springs and 3-2 in an end-to-end battle with Waterside Karori, who went through with Olympic to the quarter-finals.

Still a fantastic weekend and plenty to look forward to for next year. There was some great football on display, a number of our youngsters made their tournament debut (Campbell Webster, Joey McDonell, Cole Kennedy and Tyron Curtis), the supporters were awesome (family, friends and senior club players) – and the weather was superb!

And we were awarded the Fair Play Award by the Tournament organisers – great work team!

However, it is the end of the U19s road for a few of our boys (Connor Peirce, Blake Sinden, Sam Patterson, Oscar Hanlin, Carlos Byers, Ben Wood and Donal Gahan). Some of whom have been going to the Napier Tournament since they were 15!  We look forward to seeing them all back for senior football in the new year.

Thanks to everyone involved who contributed to a successful weekend: